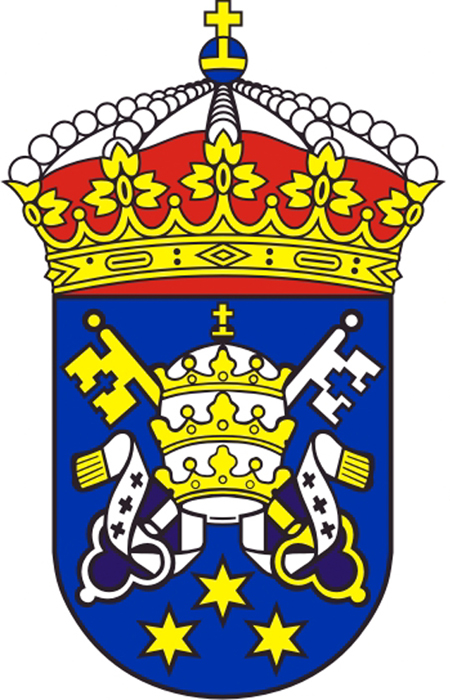 MELIDE is 454 metres above sea level, in the Serra do Bocelo foothills, at a crossroads between Santiago, Lalín, A Coruña and Lugo. The municipal district has a population density of 78 inhab./km2, with a total population of 8,090 inhabitants (May 2009 Census), divided among 26 parishes.

Its central location in Galicia places it on the N-547 road (Lugo-Santiago) and the AC-840 road (Betanzos-Ourense), about 54 km from Santiago, 52 km from Lugo, 75 km from A Coruña and about 85 km from Ourense. In relation to transport, it is well connected with the Santiago-Lugo bus service (run by Empresa Freire) and with A Coruña (by the Arriva company).

In the last decade, the economic weight of the agriculture and stockbreeding sector has gradually decreased due to the rise of commerce, which is now the main pillar of Melide’s economy.

Churches
Melide has numerous churches in different styles, among which many Romanesque gems stand out. It is worth mentioning the following: Santa María de Melide (classified as a National Monument), Santa María do Leboreiro, San Xoán de Furelos (sculpture of Christ with a lowered arm), San Vicenzo de Vitiriz, San Martiño de Moldes or San Xoán de Golán. The town of Melide features the Romanesque façade of the Chapel of San Roque, the Renaissance parish church of Sancti Spiritus, the Religious Foundation of San Antón and the Chapel of El Carmen.

Ways of St. James
Melide is at the crossroads of different Ways of St. James. The French Road and the Original Road (from Oviedo) merge in the town centre. The history of theWay has left its mark on Melide in the form of a Pilgrim Hospital (from 1502), which has now been converted into the Museo da Terra de Melide.

Traditional Architecture
This municipality’s heritage is made up of stones that have seen the passing of generation after generation: medieval bridges such as that of Furelos and O Leboreiro or the oldest stone cross in Galicia, located to the right of the chapel of San Roque in the town centre. Apart from this stone cross, Melide features other crosses of the same type in its different parishes. Lastly, it is worth mentioning that this is an area of well-preserved “hórreos” (stone granaries).

Gastronomy
Traditional confectionery is one of the municipality’s main attractions, including an exclusive product called the rico. Every day, the town’s traditional ovens bake “melindres,” ricos and “almendrados,” which make Melide a sweet region. The second Sunday in May hosts the Festa do Melindre e da Repostaría de Terra de Melide, which always pays tribute to the artisanal trades that have shaped its tradition (ironsmiths, shoemakers, tinsmiths…). According to tourist guides, this is one of the Galician regions that, despite not being on the coast, prepares the tastiest octopus dishes.

Albergue de Melide
Where to sleep
The Melide hostel is located at km 18.8 in the 29th stage of the French Road (from Saint Jean Pied de Port). Remodelled in 2010, it is located in...